The following projects are "on my back burner." All of them deal in some way with party change. Certain readers may find these papers useful. 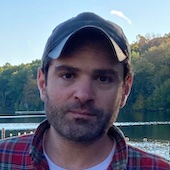