I am Assistant Teaching Professor of Politics at Drexel University. My research uses mixed methods to study electoral reform, the U.S. party system, and how these interact at the state and local levels. Most of my teaching is in American politics and methods. I also teach a course on electoral systems that prepares students to evaluate reform proposals.

My book, More Parties or No Parties (2022), introduces a 'shifting coalitions' theory of electoral reform and analyzes historic use of ranked-choice voting (RCV) in the U.S. The book is written mainly for Americanists and reform practitioners. It draws on data from cities that had, repealed, and/or failed to adopt proportional representation during the Progressive Era and New Deal. RCV finds favor as a way to promote nonpartisanship but is not stable in a two-party system. For this and other reasons, I suggest party-list reforms instead. Here is an excerpt.

Other projects look at change in the U.S. party system, current developments in electoral reform, and their effects on descriptive representation.

My Ph.D. (Georgetown University, 2017) was in American and comparative politics. I also earned an M.A. (Georgetown, 2009) in democracy studies with a focus on institutions. Between those degrees, I ran ElectionGuide.org at the International Foundation for Electoral Systems. I also worked at the Campaign Finance Institute in Summer 2008.

I was a Research Fellow at the Democracy Fund for the 2017-8 academic year, then an adjunct professor in James Madison University's DC program. Before graduate school, I worked for FairVote, Café Bonaparte, and a congressional district office in Connecticut. 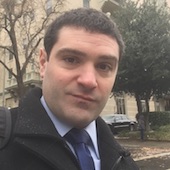